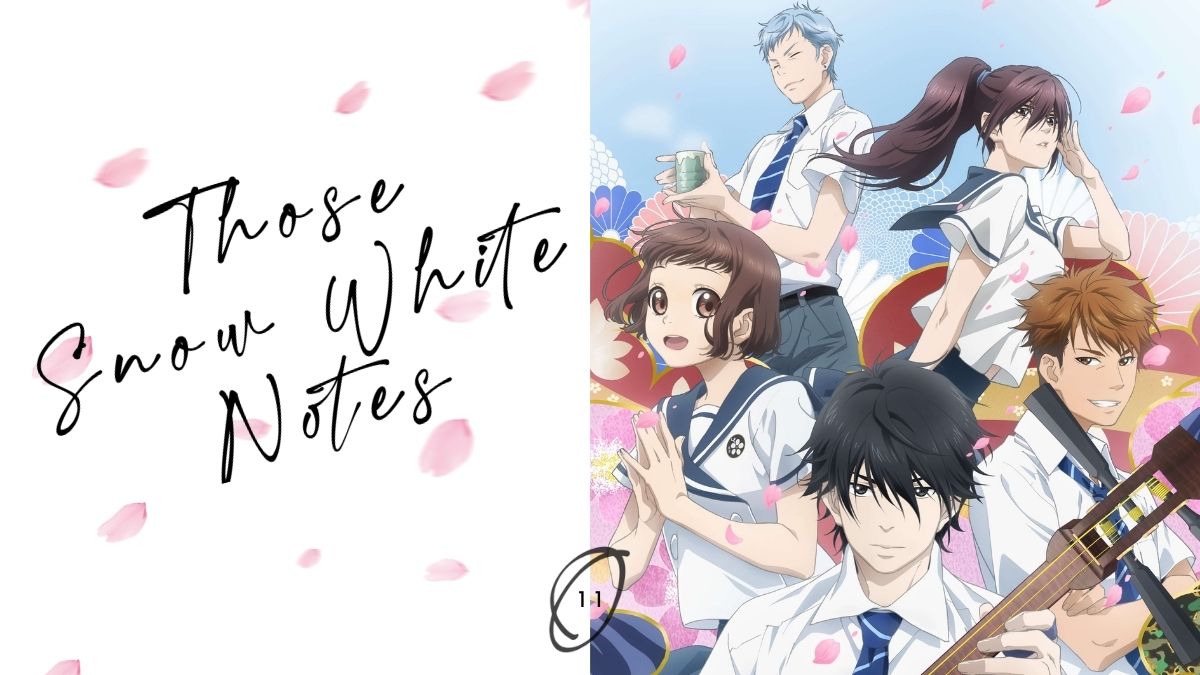 Hellooo peeps, hope your week is progressing well. I’m here with another review. I was a bit puzzled as to why the episodes were so damn emotional lately, only to realize the season will be over for Those Snow White Notes in a couple of days? How dare they?! A whole season passed without me knowing how or when the hell it did. I’m not here to whine, though. New season means new anime and I’m equally excited!

Okay. We pick up from where I left my heart at; the broken string. That heavy silence filling the hall felt heavy and I held my breath along with the rest as Kaji weighed his options anxiously. One of the jury members was about to pick up the mic when Kaji gathered up his courage and continued where he left off! There goes my boy! Through Kamiki Seiryuu and Setsu’s inner thoughts, we learn that the shamisen Kaji is playing loses its intensity and while there’s a limit to what he can do, it’s still amazing that he can continue, considering the pressure he’s under. We, as spectators, can only admire such tenacity and cheer him on.

This moment also serves as a glimpse into what truly ties Setsu and Matsugoro together, compared to what his parents believe. Matsugoro is Setsu’s grandfather, sure, but he’s also Setsu’s teacher. Mentioning kendo in my very first review of Those Snow White Notes was not coincidental; there are occasions in kendo where you can guess who’s student of a practitioner is in a heartbeat because their attitudes resemble each other so much they look like copies. It’s not solely because the student is taught that way, otherwise, every student would be exactly like their teacher. It’s because the teachings resonate with that student and the way techniques are taught come more naturally to them that they pick up more than the others.

I think this is also the case with Setsu. He has internalized his grandfather’s attitude towards his artistry and wanted to carry that point of view into the future that he also wants to be heard, and prioritizes emotional connection with the audience. That’s presumably why Matsugoro wasn’t that interested in ‘making it big’, and Setsu isn’t very interested as well. The teachings or point of view of a mentor, of course, is imbued in the artistry itself. Hence, it’s another guess of mine that Setsu wanted to sound exactly like his grandfather because he felt the same as him and wanted to convey precisely what his grandfather was communicating. Talking about teachers, if my music anime hunch is correct, the jury member with the glasses might reach out to Setsu after the competition and become his next teacher/mentor (similar to Auclair with Nodame in Nodame Cantabile) and turn out to be a positive influence in his music.

Setsu’s mood is elevated with Kaji’s strong resolve he put into his playing, and he’s off to some secluded corner to eat Sakura’s cooking. It’s funny in a way that he had no idea who might’ve brought the onigiri plate in episode 4 even though it should be pretty obvious (I mean, who else is there?) but the moment he bites into the onigiri, the feelings come back to him and Setsu remembers through them. Not the taste, nor any other physical cues like the color of the bento box but feelings. After episode 10’s stress, up until I saw those pretty mustard yellow wedges, I was feeling myself in this episode. But of course, Umeko had to butt in.

To use Setsu’s feelings towards his deceased grandfather against him and making him feel like the last speck of his grandfather will disappear if Setsu were to abandon his style was low, even for Umeko. I was appalled at how cruel she could get right before his performance. He tried to stand up against Umeko, and his friends tried to cheer him on. I thought it would still turn out okay because right before entering the stage, his face looked calm and collected. And things are okay, but not the way they are supposed to be.

Through his performance, Setsu wrestles with others’ expectations from him, his expectations of himself, and is finally ready to sort his grandfather’s last words and keep them in his heart not as chains to weigh him down, but as wings that will take him on his journey back home. I don’t intend to describe the performance, because it was emotional and beautiful as it is, but seeing how music was one of Matsugoro’s love languages that connected him and Setsu, the obsession of Umeko, Kamiki, and Mai look all the more repulsive. And I’m glad they were portrayed as such and not covered up as ‘concerned parties’.

I guess I’m so concerned with Setsu’s and Wakana’s well-being that I didn’t have time to get sad over the season ending. Can’t believe next week we’ll be watching the final episode! Good thing is that the manga is at its 27th volume so we won’t be waiting for too long for the second season, I presume. I mentioned I had a hunch I’d like the series but didn’t expect I’d invest in it emotionally to this extent. I’m glad I picked Those Snow White Notes to review ~

How was this week’s episode for you? Are you ready to handle the season ending? I sure am not. Thank you for giving the review a read and see you tomorrow!

Other reviews of Those Snow White Notes

One Reply to “THOSE SNOW WHITE NOTES EPISODE 11 — MEMORIES”