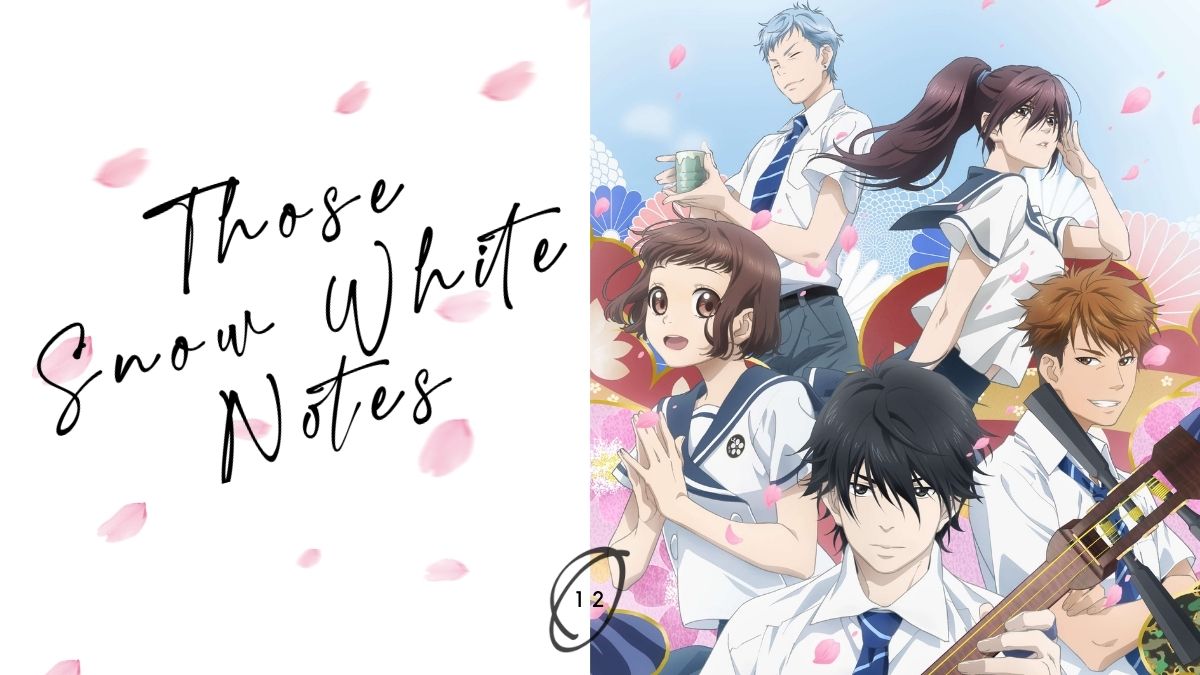 Welcome to the last review of the season! I wondered if I could do something special for the season finale like my cooking escapade for Heaven’s Design Team but couldn’t think of anything fun or creative. And it wasn’t your usual last episode where we see all the characters have fun, bond, or do fun stuff to end everything on a sweet note. No. Those Snow White Notes said “You get angst! You get angst! Everybody gets angst!!” and that’s what we got. It didn’t even feel like the last episode and I went to Anilist to check if this season really had 12 episodes. Oh boy… How am I supposed to wait until the next season arrives…

But enough about my feelings. I remember reading tweets on Anitwitter and comments on Crunchyroll over the change of the opening theme. The argument was that since openings set the tone of the show changing it after a couple of episodes threw them off and the new version didn’t fit the series. I was personally puzzled, firstly because the tone of the show did change, and going by their argument, both of the openings should fit the series in that sense. And who wouldn’t want to hear another great Burnout Syndromes song? Both of the songs are bangers! I do understand that some people don’t welcome change, and they probably have their reasons. But, seeing the final episode going back to the first opening, it was once again clear that they used the change to enhance the narrative. And it made me tear up, it was emotional.

While the episode encapsulates the fact that there will always be people who won’t be satisfied by what you put out there, and a certain disparity between how you feel about your work versus what others see in it will exist, some of the reactions were still infuriating to watch. When Setsu is finally able to say goodbye to a part of himself that clung too hard to the past, he is content with the way he presented himself on stage as well. And Tanuma Souichi’s performance ignites a part of him that remained dormant until now.

It’s great. Because Tanuma’s declaration backstage sets Setsu in motion. Setsu knows that he lacks, and although doesn’t verbally express it, he thinks Tanuma is amazing. Right before the announcement, we witness Setsu confiding in his brother that he wants to get better. If the emotions you feel can help you channel your energy into working on yourself and encourage you to rise to a challenge, then it’s amazing, right? Because even in the face of defeat, Setsu’s mind is more occupied with artistic growth than placements in a competition.

It’s also amazing in itself that the moment Setsu understands his grandfather’s words on connecting with the audience, he realizes that he’s finally ready to go on the journey with a clear mind, rather than thinking he’s already reached the destination he set for himself.

And it’s all good. Until the contestants go up on stage to receive their awards.

When it’s announced that Umeko is to present Setsu’s award, Kouta’s immediate reaction is “Uh-oh…”. Damn, my gossip buddy’s hunch is never wrong. Umeko walks up to Setsu, congratulates him, ‘accidentally’ drops it only for the award to shatter into pieces, and whispers into his ear that he embarrassed her. As if that wasn’t enough to make Setsu lose the footing he thought he just found, it’s Kamiki Ryuugen and Seiryuu’s time to butt in. Ryuugen questions why he sounded like Matsugoro in the first half of his performance as if both he and Umeko weren’t after capturing Matsugoro’s sound through Setsu for the whole goddamn time. He does touch upon an important point that Setsu is in need of a teacher, but does so after belittling Setsu’s hard work and hitting him with an “I knew you’d lose to Souichi,”. After he’s left, Seiryuu takes over and while he asks very interesting questions Setsu can benefit from asking himself or talking about it with a professional like Seiryuu, all of these do nothing but induce more anxiety and Setsu runs off, experiencing what seems to be like a panic attack. The season, overall, ends on a bitter note.

I have mentioned my reservations about the sound design in certain important moments and flashbacks, but now that the season is over, I noticed one thing the show has managed; ingraining the basic melody of Jongara Bushi in the audience’s ears throughout the season. There’s no way a novice like me could comment on instrument quality, techniques, or the imagery it should evoke in me but I noticed I was quite familiar with the base melody of Jongara Bushi and was able to recognize the embellishments or variations in it when it was played by different characters without putting any extra effort.

Animation-wise, the show had great moments as well as some downs but overall, I was quite satisfied with the colors and animation quality delivered what needed to be conveyed when it counted. What mattered for Those Snow White Notes were nature and scenery since the metaphors used to describe music throughout the season all referred to either natural phenomena or a certain scenery. Those backgrounds were so nice to look at, especially in Episode 4 where we see a flashback of Matsugoro’s traveling times. Those Snow White Notes gets the passing grade it deserves.

This was certainly a journey! Series that focuses on niche artistry or professions can be a hit or miss for some; as in you either find it interesting or feel totally lost as to why in the hell you’re spending your time on such a show. If the music played in the series is not to your taste, then it would probably be hard to keep up with it but if not, Those Snow White Notes have so much to offer. It’s also possible to draw parallels between what Setsu is going through and our blogging experience. A lot of the questions I mentioned above can be asked through the blogging lens as well; engagement, creating content to suit others’ tastes or of what’s popular at that time vs. writing for yourself, expectations of others vs. your own expectations from your writing. Of course, Those Snow White Notes hint that it’ll take a long time to explore these topics and there may not be clear answers, it’s fun to think alongside Setsu and the rest of the gang.

I’m thankful for all your support and for keeping up with me! I hope my reviews were fun to read because I had fun writing them! I still haven’t decided on what to review for the next season, I’m waiting for Crunchyroll to announce the line-up. When they do, I might also put up a poll and ask for your opinion! Until then, take care of yourself and have a nice week.

Other reviews of Those Snow White Notes