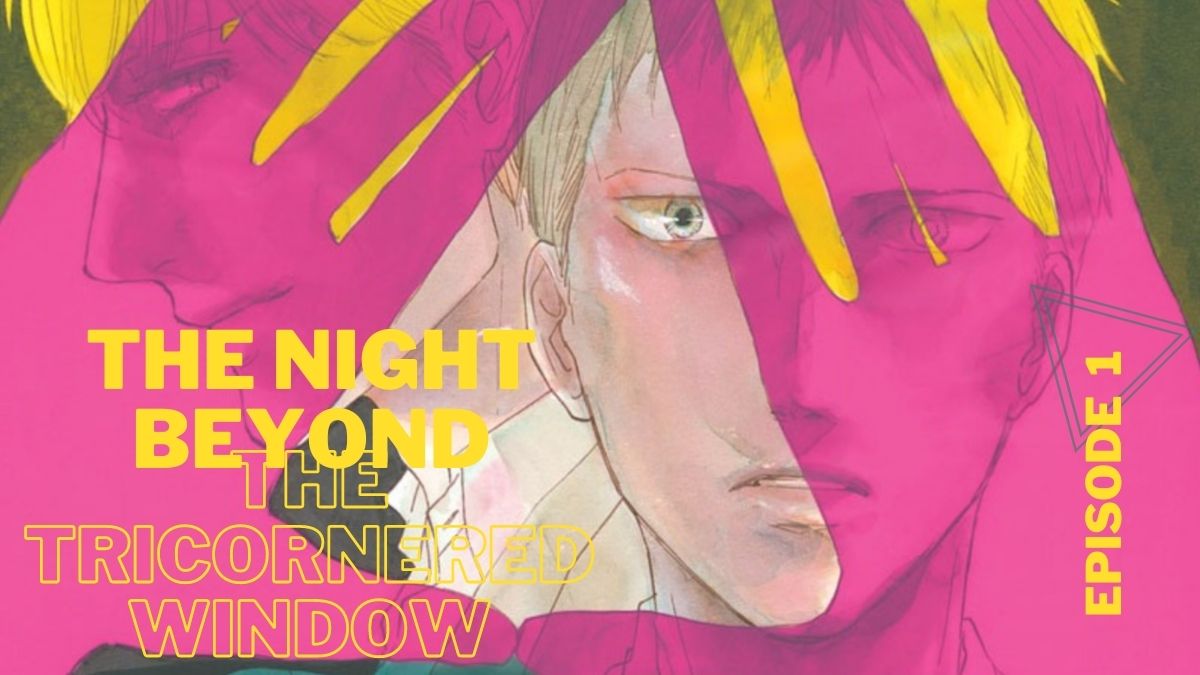 Hello! We have started to see new seasonal anime drop one by one. Seeing this post, some of you might have thought, “Of course Nora’s going to review The Night Beyond the Tricornered Window, just look at her blog’s handle,” but to be honest with you, I didn’t plan to do it. I was looking forward to it ever since the adaptation news hit the BL fandom, but reviewing it weekly didn’t even cross my mind. But you know, such is life.

So, where do I start? Maybe with a heads up. I’m excited about the series. This means I’m willing to gloss over some aspects I might criticize in another anime. To give you a bit of context, Yamashita Tomoko, the creator behind Tricornered for short, was one of the first artists I’ve met when I started BL. And her name has stuck with me ever since. I’d group her storytelling along with Kumota Haruko (Descending Stories) or Nakamura Asumiko (Classmates). If you’re not familiar with the names, she’s good at it. I haven’t completely read this series’ manga, decided to read the parts that are animated right after I finish the episode. (Edit: I noticed I forgot to add a recent interview done with Yamashita Tomoko on being mindful of the message you’re sending out into the world, and it made my love grow ten fold. I think it’s a great piece to have an idea of the sensibility that she is able to capture in her works without actually reading them. )

Another reason I’m willing to overlook things, especially the technical aspects, is because it’s BL. GL (or yuri) is also on the same boat with BL when it comes to limited effort, budget, and time put into when it comes to adaptation compared to mainstream genres. And I don’t know how other fujin might feel about it, but these series can be a hit or miss. It’s hyperventilation out of equal parts of joy and anxiousness. The production value has gone up in recent years and there have been several good adaptations like The Stranger By the Shore or Given that were able to gain positive remarks from anime fans who aren’t familiar with the genre. I’m excited to see how Tricornered will fare.

Mikado Kousuke is your run-of-the-mill clerk in a bookshop. According to Skull-face Bookseller Honda-san, the common image of a bookstore staff is that they have dark hair, glasses, and are lanky. Mikado checks all that, with one additional talent: he can see ghosts. Not that he wants to, he even takes out his glasses when he’s walking around so the real people will blur out and he can steer away from the ghosts. Out of sight, out of mind. At least, until a tactless man named Hiyakawa Rihito shows up at the store and asks him to be his assistant in exorcising the supernatural.

What happens in this episode is a lot of building; we get a taste of what kind of characters Mikado and Hiyakawa are, the basic mechanics of how do they get rid of the ghosts, and what kind of work Hiyakawa runs in that ‘appraisal & cleaning’ office. Apparently, people on Reddit are calling it “Mob Psycho but make it BL and Reigen isn’t a scammer”. It’s pretty much on point.

Thoughts on the first episode, Encounter

Starting with my notes on the production because the ones related to what happens in the series are basically me screaming. I love how the colors in the background pop, but still have an ominous feeling to them. I haven’t noted anything down about the sound design, but now that I think about it, there’s a general lack of music to set the mood. Instead, it’s either the bustling shopping street or the usual clacking of tableware in a restaurant.

The voice acting feels overly dramatic compared to what happens in the scene at times, but I loved the tone overall. Especially Hiyakawa’s VA Wataru Hatano (Edward from Shadows House, Metal Bat from One Punch Man) did a very good job in portraying his aloofness.

There is quite a lot of motion in the series, but we don’t see them animated. It’s either the camera moving on a still pose or the action happens out of the screen and we see reactions from surroundings. While I kept wishing for more action on screen, I also understand the limitations.

As for the execution; I’m glad the erotic tone of the exorcism is addressed and wasn’t toned down on the screen. It is shown as it is, and most of the time the adaptation followed the manga quite faithfully. One aspect that was lacking, though, was the banter between Mikado and Hiyakawa flowed more naturally and had a more teasing tone to it in the source material. I did think the episode could use more of the funny reactions of Mikado to break the heavy tension at times. This way, Mikado being frightened and confused would come across more easily. Now, he rather looks like a stuck-up character similar to Kageyama from Haikyu!.

Another thing that could’ve been done better was the transition from Hiyakawa’s office to their first official exorcism together. I don’t mind taking details out or cutting corners during adaptation, just that the development happened too abruptly. It could use a line like “After we’re done with the tea, let’s head out to the client’s place,” or something. These are not huge deal-breakers, although they might have an effect on the audience’s enjoyment who aren’t as determined to keep up with Tricornered as BL fans.

In the second half of the episode, we move on to a bigger case where the duo meets Hanzawa from the police force, who is determined to solve an already closed case because he isn’t satisfied with how things have wrapped up. During their talk, there was a recurring shot of the mannequin outside, but I couldn’t understand whether it was referring to the killer putting together one corpse out of several, or there was a hint I was supposed to get from the clothes. We are also left with several questions about just who Hiyakawa is or why the heck is he munching on a curse. But it’s good that they are leaving us hanging, I guess! According to authorities (a.k.a all the romance series I’ve been binging), you should leave something to be desired for the next date.

Despite the hiccups I mentioned above, I think The Night Beyond the Tricornered Window does a good job of establishing the dynamics between its main characters and laying the foundations of the mechanics behind the exorcism. The animation quality might not leave you speechless, but it’s not a huge eyesore that you need to look away from either. Eroticism, vitality, and the supernatural are linked more closely than it’s usually covered in animation, and depending on how you look at it, it can be a fresh and intriguing take on the common trope.

Have you seen the first episode? Is it talked about in your social media circles? It is certainly hyped up in mine, but I’m always curious about what are the thoughts of people who aren’t familiar with Yamashita Tomoko’s works or BL in general. So please let me know what you thought of it if you did see it. If not, hopefully, the post was interesting enough that you decide to give Tricornered a shot. I’ll meet you on Mondays to gush about the series, so until then, hope you have a nice week ahead!

The rest of my The Night Beyond the Tricornered Window reviews: