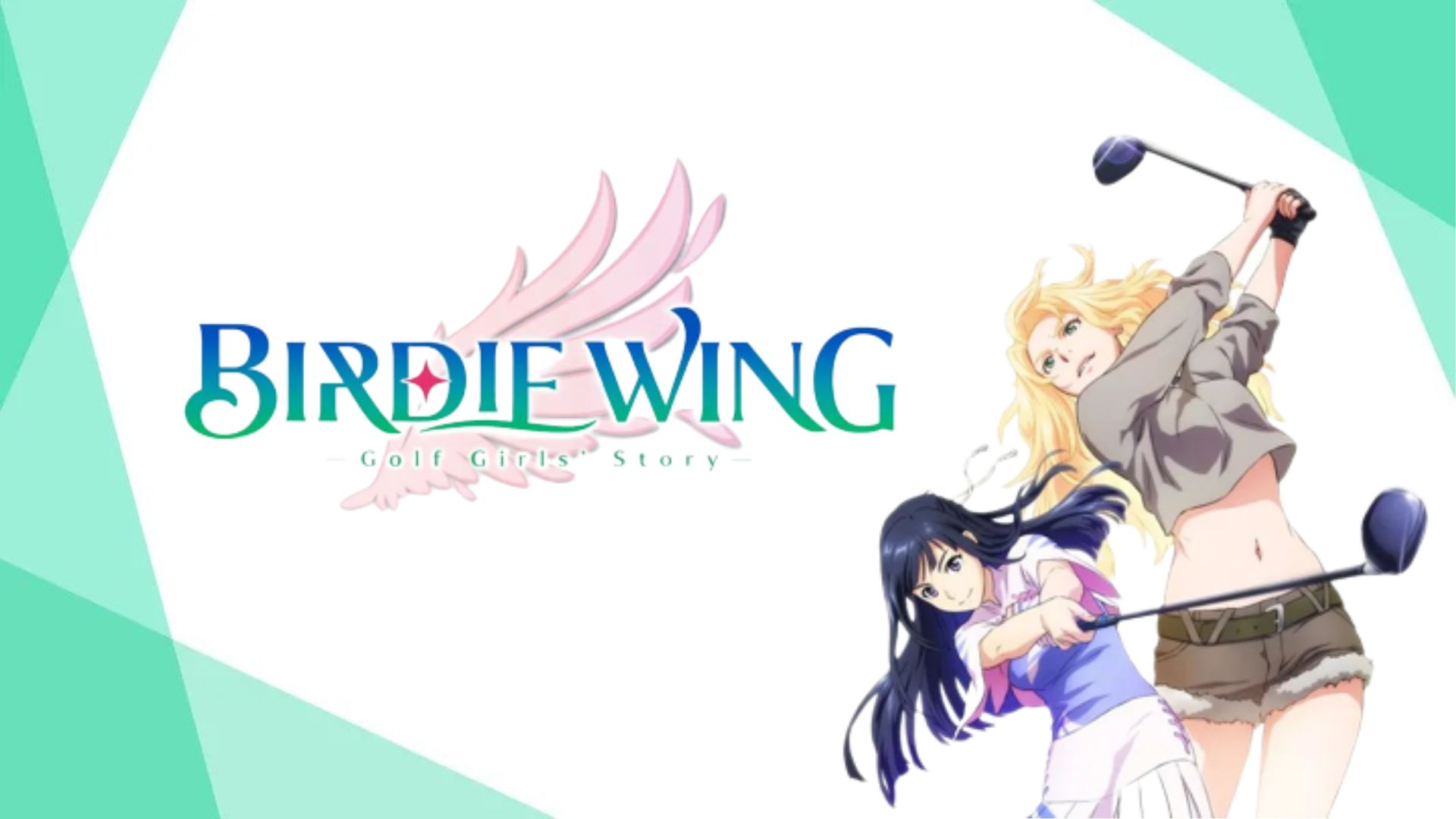 Hello! A lot of the series that aired last season, I had to put on hold and finish later on when they were completed and BIRDIE WING -Golf Girls’ Story- was one of them. I watched the season finale just now and wanted to put together a brief review. I don’t think there’s anything to spoil about this series, but just to give you a heads-up, this review contains no spoilers.

Birdie Wing focuses on two young women who come from very different backgrounds. Aoi is the prodigal daughter of two famous golf players and the owner of the golf equipment manufacturer & brand Athena. Eve, on the other hand, has no memory of her childhood and is taken in by a bar owner named Clara, who lives with a young woman and three kids who barely scrape by. Aoi is already the ace of the prestigious Raijin Girls’ Academy, which is one of the strongest schools when it comes to golfing. Eve is much less fortunate in terms of her financial situation and living conditions, and she’s playing “betting golf” underground, basically gambling. An Under-15 Championship brings these two together and their obsessi- coughs- rivalry with each other only grows from there.

Starting with production notes. Birdie Wing came out from Bandai Namco Studios, who took over Gintama from Sunrise, and they also did Welcome to the Demon School Iruma-kun. Both series were visually remarkable, if not masterpieces. As for Bridie Wing, it’s the familiar case of nothing-stood-out-nothing-stuck-out, meaning it was smooth sailing overall. I’m guessing golf having minimal body movement compared to other sports played a substantial role. While we still got action lines and simple gradients of colors instead of the background they are golfing on when the girls, but especially Eve, were stroking, the movement of stroking itself was animated well and stayed consistent throughout the series.

I felt lukewarm towards the opening and ending themes, although I loved the still images that were bursting with color at the first seconds of the ending. The opening theme song Venus Line, sung by Kohmi Hirose, felt like a 90’s commercial song or an American TV sitcom opening. It could be a great stylistic choice coupled with those melodramatic, retro-ish moments if it was supported by the rest of the series. That wasn’t the case, but it’s not an eyesore or anything. I just skipped it.

I have to mention that I have no interest in golf and have no idea about its rules. I didn’t mind much going in, since the explanation of the rules or scoring system is usually a part of the narration. I was VERY surprised that this show didn’t bother with the specifics of golf. Like, at all. I had to Google what “par” or “10-under” meant. For the clueless like me, par is the pre-determined number of hits a golfer is expected to perform to complete a hole. For example, if you’re on a par-5 hole, you’re expected to stroke 5 times and get your ball into the hole. More strokes than that and you’re over par or less and you’re under. Meaning, that if you complete the par-5 hole with only two strokes, you’re 3-under. Whew, that wasn’t too hard! But it still made me chuckle how we weren’t given any explanations at all. Birdie said, do your own damn research!

One thing you might like to be vary going into Birdie Wing is that there’s a lot of Anime Bullshit TM crammed into this series. It’s not even the names these young women come up with for their golfing techniques and yell out in the middle of matches. Those names in sports anime have always been a tad embarrassing (except, maybe Nishinoya’s Rolling Thunder, and that’s it), but still kind of pump you up. It’s the first half of the season that’s riddled with the mafia, redeveloping the slums where Eve and her found family were residing, the betting games to reclaim the land, and lots of veeery convenient coincidences that I had to do a lot of glossing over for the sake of these girls. While it wasn’t so detrimental that I wanted to drop the series, the average fan might want to brace themself.

One very important question that begs an answer concerning sports anime is, of course, how gay is it? On the Homophobe Scale from 1 to 10, this series is a hard “I mean I don’t have anything towards gays but… why do they have to rub their gayness on our faces? Can’t they go and be gay discreetly in some corner???”. Birdie Wing doesn’t hold back on using Eve’s tomboy-ish charms and her “foreignness” to play around the boundaries. Even if you’d want to think of the naming of her “Rainbow Bullets” as a mere coincidence, in the second half Eve uses her charms on the Girls’ Academy students to make them spend time with her, names her one important technique after Aoi. Throw in some kisses, lots of blushes, “Let’s do it, partner!”s, and constant teasing, we have ourselves a full-course meal. In terms of their dynamic, I was reminded of Banana Fish‘s Ash and Eiji. One is rough around the edges and the other is sheltered. Hopefully, no such tragedy awaits our girls.

Birdie Wing is a series that sports anime fans will not have a problem with. While it’s true that narration doesn’t necessarily stick to the usual construction of the genre, you get to yell “Full-strength Bluuueee Bulleettt!!!” with Eve, and that’s fun in and of itself. Eve and Aoi’s flirting is not subtle at all, so I think there’s enough material that’ll make Yuri fans happy. I do think they could’ve toned down the crazy, but the series as a whole is done competently and provides enough fun and intrigue to make your stay worthwhile.

Hope you enjoyed my review and it’s enough to convince you to give at least the first episode a chance. Or maybe you’ve seen it already. If so, let me know what you thought about it in the comments! Thanks for stopping by, and see you next time.

One Reply to “BIRDIE WING REVIEW — LILY FLOWERS ARE BLOOMING”